Many news outlets have already discussed this, but as the father of two daughters (even though they have grown older than the target demographic) I felt the need to weigh in on the apparent black balling of Black Widow from the Age of Ultron toys currently hitting the market.

For those of you who haven’t heard, Black Widow is a female super hero member of the Avengers and a relatively key character (apologies if my sarcasm drips onto your keyboard) in the latest blockbuster from Marvel and their parent company, Disney. An example of her awesomeness is shown below and was one of the scenes featured in the trailers for the movie.

She drops out of a jet on her motorcycle and speeds off to help save the world. What child wouldn’t want an action figure of that, right?

Evidently, Hasbro, Marvel, and Disney think no child would. Here is the play set based on this very scene that has been rolled out for kids to play with: 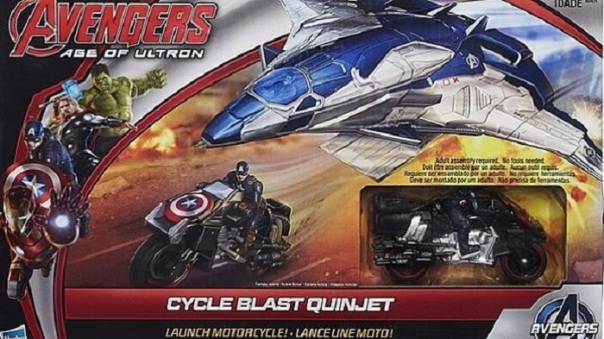 Do we notice anything missing from this? Hm. It seems to have a definitive lack of Black Widow.

Yes. That happened. Black Widow was replaced by Captain America in one of her signature scenes from the movie. In fact, there is no Black Widow action figure to be found, even if you wanted to buy one separately and have a proper representation of the movie.

My question is: why? Even if your marketing showed you wouldn’t move as many units of Black Widow figures as Cap, Iron Man, Thor, and Hulk (Hawkeye has proven to be a poor seller, yet he is still represented), wouldn’t you feel it prudent to at least produce a small run of them? There are so many things wrong with this lack of foresight, I have a hard time even typing this post.

We all want our children to grow up in a better world than the one we did. I think that is safe to say for any parent, regardless of generation. I, for one, would like children to grow up to view all people as equals, regardless of gender or race or religion or sexual preference or whether they like broccoli or not. (Broccoli was spawned from Hell, in my opinion, yet I don’t begrudge others who enjoy this waste of a plant — at least most of the time) What sort of messaging does this merchandising send to kids? I certainly can’t see anything positive about it.

So, come on Hasbro, Marvel, and Disney! You can do better! We want our kids to understand that being a hero is not about gender or race. It’s about our actions and what we believe in.