I went to see Justice League yesterday and, while it was better than most of the DC movies— admittedly not a high bar, it still fell flat in comparison to what Marvel has been producing.

I’ve been considering the whys and wherefores of DC’s continued failings on the cinematic front and have come to the conclusion that the root of the problem goes much deeper than the people involved in producing the movies. The crux lies at the heart of the DC universe itself:

He is the gold standard for heroes. He can literally do almost anything— depending on which series of the comics you follow— and has an unshakable morality. In short, he is a god.

Now, when trying to create other heroes to exist in a universe with Superman, those heroes have to exhibit abilities which at least rival the Man of Steel, or they become laughably insignificant in comparison. Wonder Woman is almost as strong as he is, as well as having weapons of incredible power themselves; Flash is as fast— or slightly faster, again depending on which series you follow— so fast he can manipulate time; Aquaman is also incredibly strong and nigh invulnerable, especially in the water, and the list goes on.

It even seems like DC understands their problem, to a degree, when young Barry Allen asks Bruce Wayne what his super power is in the movie. 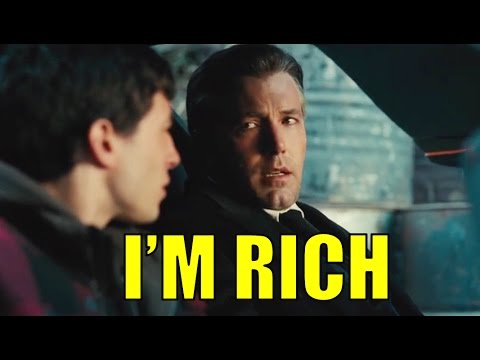 You have been warned. 🙂

So, the movie begins in the aftermath of Batman vs. Superman: a world that is now bereft of the man of steel and new threats are looming. Batman works on putting the band together and the big bad, Steppenwolf, (DC has always had a terrible time with names, in addition to their Superman problem) is doing his bit to bring an apocalyptic end to Earth. He does an impressive job in the beginning, wading through the Amazonians and Atlanteans to gain two of the pieces to his Unity puzzle box, and mostly puts the smack-down on Batman’s newly-formed team while trying to find the third and final piece.

To this point, the movie is pretty good for the most part and I was enjoying it. The characters were flat, but there’s only so much time for development in a team-up story such as this, so I was willing to forgive a few stereotypes and obvious gags. Because of the defeat, however, Batman decides the only way they can win is to try to raise Superman from the dead.

And it went downhill from there.

The fight scenes were amazing and comic book-esque, but all of the tension the story had built to that point evaporated once Superman returned and regained his senses upon seeing Lois Lane after the obligatory hero vs hero battle.

The big bad and all he had wrought suddenly became no more than a comic foil for the heroes and the concluding battle was just an excuse to smash stuff. Steppenwolf was barely an annoyance for Superman and only delayed his defeat because Superman had to go save a building full of innocent bystanders while Flash rescued one family in a pickup truck.

The apocalypse ended with a whimper and a laugh.

Hero stories are about someone overcoming incredible odds to eventually triumph against an implacable foe. The presence of Superman turns that on its head and suddenly the bad guys become insignificant and the other heroes merely sidekicks.

Pulling back and looking at the bigger picture, humans themselves become completely irrelevant in a world with Superman. The only ones who can carry water for him are like gods themselves: Wonder Woman, Flash, Aquaman, Cyborg. Commissioner Gordon exemplifies this when he calls for Batman to ask about a series of abductions in the film, claiming the police force could find no pattern to them. Half a second later, the heroes spout off a complete analysis of what they’re shown and disappear to act on the information. The message there is clear:

Regular people have nothing to contribute.

Who wants to live in a world like that?

Marvel’s universe has some incredibly powerful beings too, but they are also flawed in many ways, which makes them more relatable as characters. Normal people can still have an impact in that world, which, for me, makes for a much more interesting and enjoyable fantasy.

Please, tell me what you think! Did you enjoy the movie? Disagree with my assessment? I’d love to hear your opinions.